You’re approaching menopause. You’re approaching “50.” Does menopause plus the magic number “50” mean you are also approaching fat? The answer to this question is a resounding NO! You could be entertaining weight gain if you are in either of the above scenarios, but it is not inevitable. Hormonal changes of menopause might increase the chances of extra pounds going on around your abdomen vs. your hips and thighs. But hormones alone can not be totally blamed for weight gain that may occur around menopause.

Is there any possibility around the age of menopause any of the following are also occurring which will decrease your calorie burn:

Weight gain related to aging, as well as lifestyle and genetic factors. Muscle mass typically decreases with age, while fat increases. As muscle decreases, so does the rate at which your body burns calories. Have you increased your resistance workouts to maintain your muscle mass? If you continue to eat as you always have but are not increasing your physical activity you will gain weight. When you hit 50 you need to be exercising more, not less than when you were 40. A minimum of 150 minutes of cardio per week plus strength training twice weekly is needed to try and prevent weight gain. If weight loss is desired additional exercise will likely be required.

Calories will need to be tweaked slightly to maintain your current weight through the decades. Seek the help of a registered dietitian to calculate specific adjustments for you. At Banister Nutrition we will conduct an RMR test (resting metabolic rate) to get an exact printout of what your daily energy burn is. This is a very simple 10 minute breathing test which determines exactly how your body is burning calories.

Inadequate sleep may also contribute to weight gain. When you are not getting the recommended 7-8 hours of sleep each night, you tend to snack more and are not as disciplined and focused on making responsible choices. Sleep deprivation also affects hormones ghrelin and leptin. Ghrelin stimulates appetite and leptin suppresses appetite. Inadequate sleep is associated with reducing leptin and elevating ghrelin. These hormone changes result in increased hunger and appetite especially for foods with high carbohydrate content which of course may contribute to weight gain. Get your sleep if weight management is of concern to you.

Do you think your metabolism is so-o-o-o slow or maybe almost dead which explains why you can never lose weight or why you gain weight just looking at food? If you feel this is true for you let us check out your metabolic rate and find out for sure if your oven is still cooking or if it’s truly burned out. We can measure your resting metabolic rate with a very simple 10-12 minute breathing test in our office. The test measures the oxygen your body consumes and uses this information to calculate your Resting Energy Expenditure (REE) or Resting Metabolic Rate (RMR).

We will provide you with a printout, which tells you if your metabolism 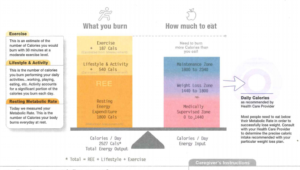 is dead or alive (helpful information for all of us to know), and how many calories your body burns on a daily bases. The dietitians at Banister nutrition perform this test on the majority of all new patients to determine your accurate calorie burn. Reliable energy information is the foundation to calculate all calorie and nutrient requirements for any diagnosis.

Your metabolic rate may be affected by:

The RMR test requires you be in a fasting state, no caffeine and only water for 4 hours prior to the test. Digesting food at the time of the test will raise your RMR as will consuming caffeine. In order to solve a problem we must first accurately identify the problem. You don’t want to be blaming a supposedly “slow metabolism” for you weight or health issues if that is not actually the real problem. -HM

The Biggest Loser contestants lose large amounts of weight during the show through dieting and intense workouts. The winner of season 8, the season followed in a recent study, had calorie deficits of 3,500-calories per day (1 pound per day!) and exercised 7 hours each day. The study emphasized that while each contestant lost large amounts of weight, they also suffered ill-effects related to their extreme weight loss. Thirteen of the fourteen participants regained weight after the show, in part 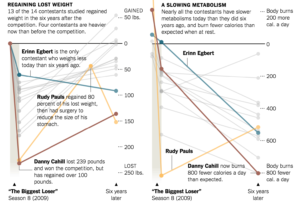 due to their significantly lowered resting metabolic rates (RMR), which resulted from their severely limited caloric intake. This change in their RMR is called metabolic adaptation and averaged ~500 kcal per day lower than expected in season 8 contestants. In addition to their lowered RMRs, the contestants also produced substantially less leptin, a hormone that controls hunger.

Although the study was small, it has reinforced the battle of obesity and losing weight can be a complicated path. Perhaps the show’s approach to incredibly low caloric intake and rapid weight loss may contribute to the significantly lowered metabolism and hormone levels. Crash dieting may also contribute to crashing resting metabolism rates and leptin concentrations.

Researchers are realizing the way out of obesity is a mix of biology and mental fortitude. If you’re struggling to lose weight or maintain your weight loss, reach out for help. Most importantly, seek guidance and coaching from a professional well versed with emotional and physical struggles of weight loss. We at Banister Nutrition will embrace your total lifestyle including work, activities, family demands, self-talk, stress, and emotional challenges along with your food to support you on your journey to healthy, fit, and strong.